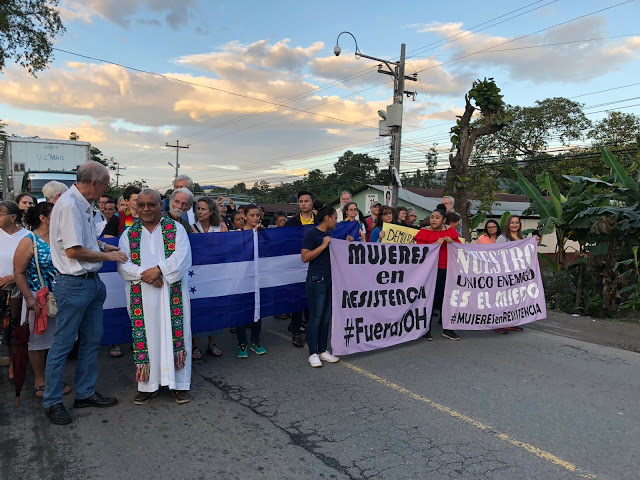 Women and Jesuit Clergy, among them Father Melo of Radio Progreso, take over the road near Quebrada Seca bridge after a meaningful mass that called for an end to militarization and violence. Photo taken by: Suyapa Portillo

Women took over the road for a peaceful march in Quebrada Seca, El Progreso, Yoro, on November 25, 2018, National Day of the Honduran Woman. On this same road, just a day before, protesters experienced heavy repression. People have been here almost daily protesting the fraudulent elections of November 26, 2017. They have been met with disproportionate force and violence from riot squads of the National Police, Military Police of Public Order and the Armed Forces, who have harmed, threatened, and shot real bullets at innocent people. One young man was taken out of his house without proper warrant and falsely accused of burning a police station and taking police gear. Unable to find the actual perpetrators of the alleged crime, police have framed him. Contrary to the fabricated story of the police, this young man’s only activity was his participation in peaceful street protests in opposition to electoral fraud. Another young woman was picked up at a protest by an unmarked civilian car. She was beaten, insulted and then thrown out of the car in the street down the road. Other protesters have been followed by National Police and Military Police agents after the demonstrations to their homes, beaten, and told they would be killed, as happened to the son and brother in law of former LIBRE congressperson Bartolo Fuentes on November 26, 2018. These intimidation tactics are infringing on local Progreseños right to peacefully protest the imposition on them of a repressive authoritarian government, which is starting to look more and more like a nascent dictatorship. 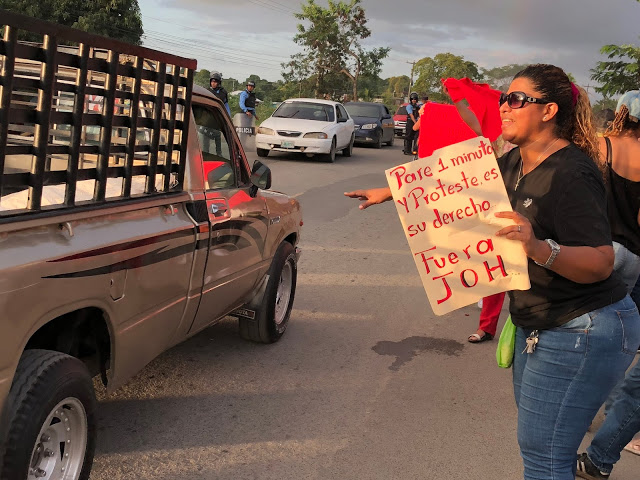 Since the elections of November 26, 2017, there has been no peace in Honduras. The unrest is not that of hopeful, peaceful protesters who bring banners, flags and creative chants calling for the resignation of the fraudulent president, Juan Orlando Hernandez, but rather the violence of the Military Police and Armed forces who shoot to kill, invade homes and shoot tear gas canisters often affecting children and the elderly. Far from a true democracy, the government regime has sought to repress civilians’ right to peaceful protest, a protected value alongside freedom of speech and freedom of the press.

Quebrada Seca was heavily militarized on January 20, the first day of the Paro Nacional (National Stoppage) to oppose the illegitimate president’s swearing in ceremony, a national strike called by those who oppose the dictatorship—the Alliance Against the Dictatorship. The exaggerated levels militarization that day dwarfed contingents of protesters and local citizens in El Progreso and the nearby Valley of Sula. In this context, the taking of Quebrada Seca by young and elderly women on Honduran Women’s Day has special significance.

Women have had to fight for any political and labor rights they have in Honduras, including the right to vote. This is why many are unhappy their vote was stolen by Juan Orlando Hernandez. They are confident in their claims, even if ample proof of vote rigging and Nationalist Party intimidation tactics, doctoring of voting documents, and plain force and repression have not convinced the US State Department, nor the Organization of American States, to invoke the Inter-American Democratic Charter, demand due process in Honduras, call for annulment of the elections and a new electoral process, with full civil society participation as well as international observers. 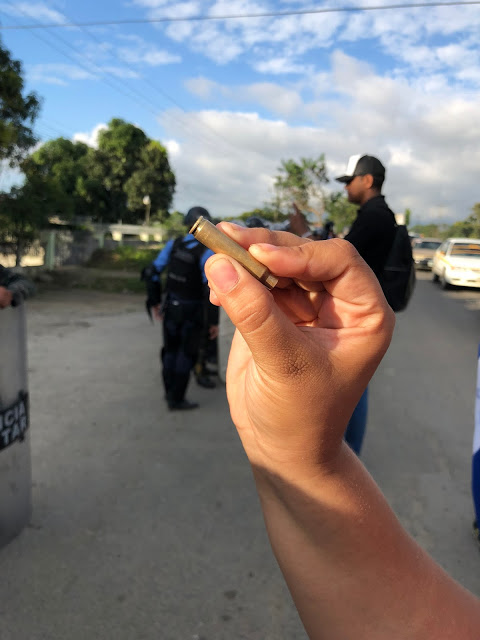 Resident of Quebrada Seca shows International Observers real bullet casings shot at them the night before during protest. Photo by: Suyapa Portillo

November 25, 2018 marked 63 years since women in Honduras gained suffrage. Though they won the right to vote in 1955, they did not vote until the election of 1957, when President Ramon Villeda Morales was elected, the first Liberal President since the dictatorship of Carías Andino, and his hand-picked successors. Since 1955, women in Honduras has been important social actors in every ambit of society, yet Honduras remains one of the most violent countries to be a woman. The feminicide rate soars as does impunity, where apparently most of these cases remain in file cabinets. Now, with the current electoral coup (as many local women call the illegal re-election of Juan Orlando Hernandez), many Feminist groups consider their situation dire. Women are employed mostly in the informal economy, including maquiladoras, which are non-union and enforce no-pregnancy and negative HIV test to hire workers. 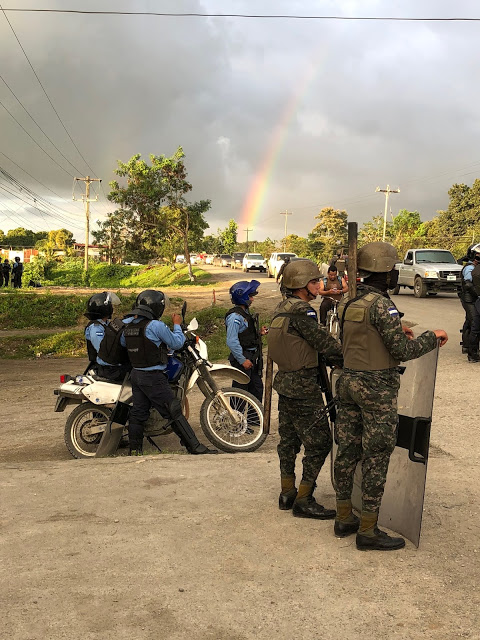 Military Police for Public Order, National Police and DPI Investigators stationed on both sides of street during peaceful protest.

Locals ascertain that they were not physically harmed on that day only because of the solidarity of international observers, a delegation of 50 North American clergy members, Jesuit priests, pastors, ministers and affinity groups accompanying local Jesuit Radio Progreso. On January 27, 2018, the inauguration of Juan Orlando Hernandez, took place with no international dignitaries present. Even more noteworthy, 5 rings of security, including National Police, Military Police and the Armed Forces, created a fortress around Juan Orlando Hernandez in the National Stadium, where he was installed as president of the people he was keeping at bay. The event was underwhelming and overshadowed by protesters courageously taking the streets to express their discontent in the face of vicious military response against unarmed citizens. While National TV and Radio stations were forced to play the ceremony live, over 80% of the population throughout the country protested, took over streets, and made their voice heard using creative protests tactics chants and posters that in invalidated the inauguration. Honduras’ future remains in the balance as the various social movements align in one concrete demand: #FueraJoh.