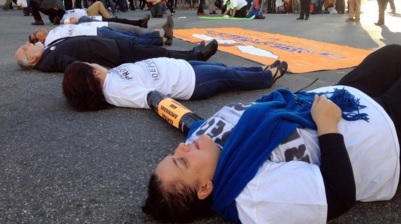 LA Times reports on the immigrants-rights protesters who blocked traffic in downtown Los Angeles as a cry for immigration reform due to the ICE raids and deportations of Central American refugees. Eight protesters participated in civil disobedience and resisted arrest by sitting in the of the middle of the intersection at Los Angeles St. and Temple St., linked together by devices known as "sleeping dragons," which had to be sawed off.