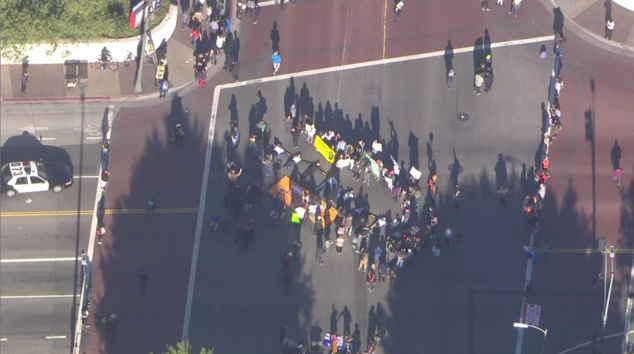 KPCC reports on the protest held on January 26, 2016 in front of the Los Angeles Federal Building by immigrants-rights activists who demand an end to the deportation raids. Eight protesters were arrested for civil disobedience and resisting arrest by sitting in the middle of the intersection, blocking traffic while linked together arm-in-arm by tubes. The protest was organized by CARECEN, CIYJA, and IYC in response to the immigration raids that occurred this month in Texas, Georgia, and North Carolina. KPCC spoke with CARECEN's Tessie Borden who echoed the need for the Obama administration to immediatley discontinue the deportation of Central American mothers and children who are seeking asylum and need protection.