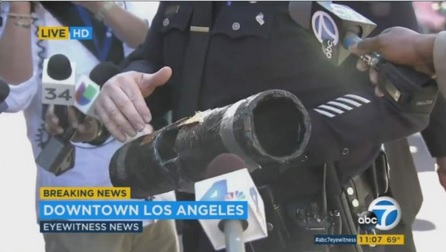 Immigrants-rights protesters blocked traffic at an intersection in downtown Los Angeles in front of the ICE building to bring attention to the crisis of deporting Central American refugees who are seeking asylum. At the press conference prior to the rally and protest, organizers demanded an end to the ICE raids and deportations. Eight activists were arrested in Los Angeles for failing to disperse and resisting arrest by linking arm-in-arm with devices known as "sleeping dragons."